Did you know the history of the Finger Lakes dates back more than 2 million years? The Finger Lakes region is not only steep in geological history but is also known for shaping American history. Some of the most notable figures that define the very morals and beliefs we stand on today – namely freedom – called The Finger Lakes their home!

1. The Finger Lakes Are a Geological Anomaly

“The Creator looked upon this land with special favor and reached down to bless it, leaving the imprint of His hand, hence, the Finger Lakes.”

Leave it to nature to create such an awe-inspiring region! Miraculously, when the last ice age ended around 11,000 years ago, the grinding pressures of the receding glaciers gouged enormous holes into the land creating the Finger Lakes we know today. As the huge sheets retreated, they left deposits of gravel that dammed streams and caused the depressions to become the Finger Lakes.

2. You Can See Layers of History in Every Area of the Finger Lakes

Layers upon layer of shifting plates formed the beauty we now admire so much. As you walk through any gorge or waterfall throughout the region, you can see the layers that created this natural beauty. It took hundreds of millions of years to form as sea levels fluctuated and shifted sand deposits to develop these natural wonders. As you stop to admire the beauty of the region, you, in turn, are looking back into history and its interweaving layers.

The eleven Finger Lakes — Canadice, Canandaigua, Cayuga, Conesus, Hemlock, Honeoye, Keuka, Otisco, Owasco, Seneca, and Skaneateles — form a triangle between Syracuse, Rochester, and Elmira-Corning. Each town and city in the Finger Lakes is connected to water by lakes, rivers, canals, ponds, tributaries, or the Erie Canal. This makes the area perfect for lots of outdoor recreation like biking, kayaking, swimming, fishing, water skiing, and sailing!

4. The Appalachian Mountains Were Once as High as the Himalayas

Geologists believe that the Appalachian Mountains, the beautiful mountain range east of the Finger Lakes, were once as high as the Himalayan Mountains! The Himalayas average 20,000 feet in height. After millions of years and shifting plate tectonics, the Appalachian Mountain range averages an elevation of three thousand feet tall, with the tallest being Mount Mitchell, at 6,684 feet tall. Today, some of the best hiking trails can be found on these mountains!

5. Native Americans Lived in the Finger Lakes for More Than 10,000 Years

The Iroquois were the last in the series of Indian cultures to live in the Finger Lakes region. Once Europeans invaded eastern North America, they forced Native Americans out of their homelands, which bordered the forest. The original forest that Native Americans lived off was made of pines and hardwoods, making it easy to hunt and gather nuts. Today, you can find remnants of the Native American culture through the names of various areas, like the Cayuga-Seneca Canal Trail.

6. Glenn H. Curtiss Was Known as the Fastest Man on Earth

Glenn H. Curtiss was a bicycle and motorcycle racer, engine expert, aviation pioneer, and engineering wiz! Born in Hammondsport, he became widely known as a successful business owner by developing his own brand of bicycles and motorcycles known as Hercules. After he won third place in a race in Brooklyn, NY, people worldwide wanted to buy his engines and motorcycles! His museum, the Glenn H. Curtiss Museum, is one of our favorite attractions in Hammondsport and the region!

7. Mark Twain Wrote Two of His Most Famous Novels in the Finger Lakes Region

Among the most well-known American notables that inspired the Finger Lakes region are Mark Twain, Elizabeth Cady Stanton, and Harriet Tubman. Mark Twain spent 20 summers in the town of Elmira in the Finger Lakes region, where he wrote two of his masterpieces — Tom Sawyer, published in 1876, and Huckleberry Finn, published in 1884. He became a fervent abolitionist, aiding shelter to Frederick Douglass, a runaway slave, and famous African American political activist, in 1838.

One of the most notable women’s rights pioneers was Elizabeth Cady Stanton. She became a voice for equality in the home. She was a leader at the Seneca Falls Convention on July 11, 1848, where all 11 resolutions were passed to end women’s suffrage, a privilege not granted anywhere in the world. Today, you can visit these historic sites, including Wesleyan Chapen, where the convention was held, and Stanton’s home.

Harriet Tubman was a key figure in leading enslaved people to freedom via the Underground Railroad. The Underground Railroad was not a literal railroad but rather was a network of routes leading to northern states. Along the way, “Conductors” like Harriet Tubman would guide escapees through towns along the railroad. One of the routes Tubman worked on frequently passed right through the town of Hammondsport.

The first-ever recorded vineyard in the Finger Lakes region dates to 1829. Today the region is the largest and most acclaimed winemaking region in the Eastern US, mainly because of the natural drainage system from the lakes. The steep slopes that surround the lakes allow rainwater to naturally drain into the lakes, while the depth of the lakes helps moderate the temperatures throughout the seasons for optimal wine growing. Today you can choose from over 100 wineries to visit! 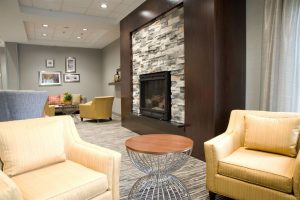 Are you ready to discover the history of the Finger Lakes for yourself? We’re ready to welcome you to the southern tip of Keuka Lake, where you’re a short commute away from historical attractions like the Glenn Curtiss Museum, The Finger Lakes Boating Museum, and plenty of world-class local wineries and breweries.

So, get ready to enjoy the best accommodations in Hammondsport with complimentary hotel amenities like daily full hot breakfast, a 24/7 exercise facility, an indoor heated pool, outdoor fire pits, and more. What are you waiting for?

Come explore the history of the Finger Lakes. Book your stay today!